Steve Cattle was born in York in 1947 and like so many people of his generation his earliest exposure to martial arts was through Judo not karate. Steve was an exceptional Judoka reaching 2nd Dan, becoming the European Lightweight Champion in 1967 and competing in the World Student Games in Tokyo that same year. However, by that time he had already been exposed to karate starting his training under Sensei Kanazawa in Wetherby. By 1970 Steve had become a member of the K.U.G.B National Team which he remained a member of until 1984. He was one of the K.U.G.B elite – a member of the Technical Committee, a Grading Examiner and professional karate teacher. I use the word “teacher” advisedly because one of Steve’s greatest qualities was his ability to teach rather than instruct. He was a formidable competitor famed for his fighting spirit and tactical ability, winning the KUGB National Championship in 1974 and 1981 and leading the Kirkdale team to victory in 1982. He was part of the British Squad that defeated the Japanese in the World championships in Tokyo something that had never been achieved before.

Steve was influenced very early in his career by a man that we all came to look upon as our godfather – the late Sensei Taiji Kase. He recognised in Sensei Kase a man with a similar body type to his and a kindred spirit – in Kase this was the Samurai spirit and in Steve his much vaunted Viking spirit. He also recognised that Kase Sensei had something different, something more to offer than the other Japanese instructors. After the first meeting he trained with Kase Sensei at every opportunity absorbing the essence of Kase’s karate, learning and developing his techniques and methods. 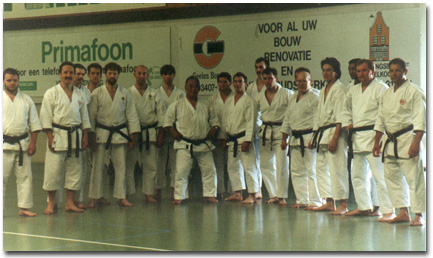 In 1989 following the death of Sensei Nakayama, Kase Sensei decided to leave the J.K.A and founded the World Karate-do Shotokan Academy and he asked Steve as one of his senior and long standing students to choose between the K.U.G.B. and his new Academy. Almost without hesitation he chose Kase’s direction and gave up a secure career and a substantial income as a professional in the K.U.G.B to start the E.S.A, taking with him a group of minded souls. His words to those of us who joined him in the venture were, “Sensei Kase is planning a system of Shotokan Karate which will take us not into the 1990’s but into the next century. I intend to follow him; I simply want to get better.”

Steve’s untimely death in 1995 left the karate world in shock, no more than his good friends and students in the English Shotokan Academy.