On 30th September to 2nd October 2016 the Oxford Kase Ha Shotokan Ryu Karate Do hosted an International Seminar in Oxford.  The Seminar was led by Sensei Velibor Dimitrijevic 7th Dan.  Vebo sensei was one of the closest assistants to the late Master Taiji Kase and is a member of the International Academy Shihankai.

No doubt many readers will recall my Interview with Vebo sensei published earlier this year in the Shotokan Karate Magazine (Issue 128, July 2016).  The Seminar was a great success drawing karateka from Finland, France, Ireland, Norway, Portugal, Serbia (Sensei’s birth country), Sweden and Switzerland as well as the United Kingdom.

Vebo sensei drew upon, explained and demonstrated the major principles he advocated in the Interview.  His emphasis was on where the power comes from, and how best we can generate that power.  To make our lives a little easier, he simplified Master Kase’s system to (1) ground contact; (2) hara control and breathing; and (3) technique execution.  For those karateka who attended the Seminar, you will of course be able to reflect on Sensei’s teaching and refer back to the Interview and make relevant connections. 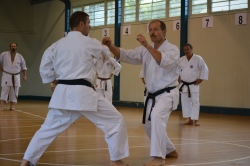 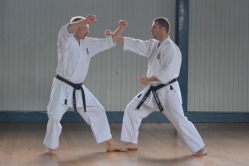 Vebo sensei has a strong following in Europe and we hope this will develop further in the UK.  As part of our commitment to that end, we plan to make this International Seminar with Vebo sensei an annual event in Oxford.  Details will follow in due course.  In the meantime, may I take this opportunity to thank all of you who attended and helped make this Seminar a truly brilliant and inspirational event.

View all posts by johnsharp5775